Here we are, 4 cake tests in, and I’m pretty sure all the people in my life who so graciously volunteered to be my testers are starting to feel their pants tightening around them and are getting sick of me shoving spatulas of frosting at them! This weekend I baked an updated vanilla cake based on the recipe that I made for our engagement celebration, from Smells Like Home. After I posted my review of that cake, Tara, from Smells Like Home actually commented on my post suggesting a frosting that she thought better fit what I was looking for. Aside from the fact that it was basically a dream come true to have Tara comment on my baking blog, I was really happy to have a suggestion for a new recipe to try. So this weekend, I made the same cake (with a few minor tweaks) and paired it with Tara’s vanilla buttercream. I cut the recipe in half to make one four-layer, six-inch cake. I kept all of the proportions from Tara’s recipe the same, with one exception. Instead of using the full amount of buttermilk that she calls for in her recipe, I adjusted to two parts buttermilk and one part regular whole milk (which I always use for baking, rather than skim milk because I personally believe when it comes to cake, you have to go hard or go home!). I even decorated the cake with delicious french meringue cookie “chips” from J’aime French Bakery in Philadelphia. 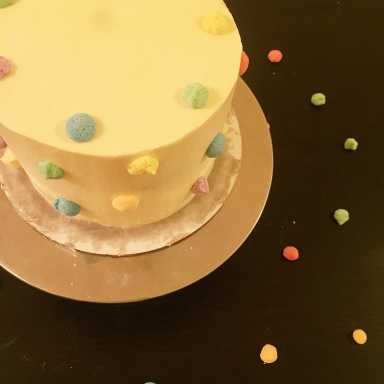 I wanted a cake that was a little bit smoother than the original cake I made a few weeks ago. I found the first cake a bit too crumbly for my taste and wanted something that felt silkier in your mouth and fell apart when you cut into it a little less. To me, it seemed like the buttermilk was the culprit. I wasn’t sure how it would turn out, especially considering that I had cut the recipe in half (oh, by the way, I used 4 egg whites – her recipe calls for 9 egg whites and I opted to round down to 4 rather than use 5). The suspense when you’re recipe testing and decorating a cake start to finish is that when the cakes came out of the oven, I couldn’t just try them right away to see if I had achieved the texture I was hoping for. I had to wait for the cakes to cool and then hope that I would have enough trimmings to try it before the entire cake was complete! As soon as I tasted it, I realized I really hit the mark on this cake. The substitution of the buttermilk with whole milk was a hit. The cake was just as deeply and strikingly vanilla as I remembered it being, only this time the texture of the cake perfectly matched the smooth vanilla flavor. It was smooth and airy without being too light or fluffy. The cake was infinitely more melt in your mouth than crumbly. The first thing that my fiancé, Ben, said when he tasted it was, “can you make this for our wedding?!” I had Ben and my mom taste the cake because they had both tasted the original one I made a few weeks ago and they both agreed that the smoothness of the texture on this cake allowed the taster to focus more on the strikingly vanilla flavors of the cake.

After reading my post, Tara suggested I try her American buttercream recipe that she pairs with her cannoli cake. Because it’s an American buttercream that doesn’t use any eggs, rather than a meringue based Italian or Swiss meringue, the texture is much richer. Decorating a cake with a richer, creamier buttercream is definitely more difficult than decorating with a silky and marshmallowy bowl of fluffy icing, but the taste payoff was infinitely rewarding and completely worth it. Since I’ve already reviewed the vanilla-bean birthday cake recipe, I’ll just review the pros and cons of the frosting here. 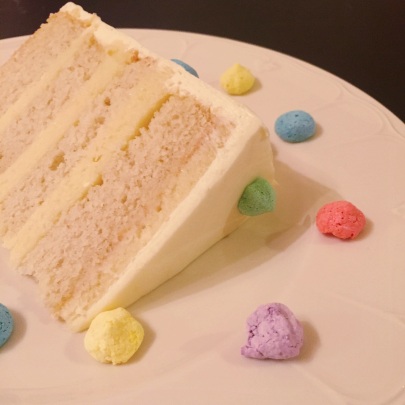 Overall Pros & Cons:
Pros: Rich but did not overwhelm the cake, incredibly simple to make, beautiful white color (which isn’t always a given when using butter!), not too sweet and really did taste like butter, rather than just tasting like a straight spoonful of sugar (which, while I love sugar, can really be overwhelming on a cake in my experience!). Additionally, it was creamy and reasonable to maneuver, but not so thin that it moved around too much!
Cons: The only real con of this recipe is that the American buttercream is a bit more difficult to spread on a cake, but as I said above, it was definitely doable!

Taste Test: A
Like I mentioned in my original post about this cake, I wanted the lightness of the flavor of the meringue buttercream but not the lightness of the texture. This frosting truly delivered that. It was denser and richer than a meringue based buttercream but was truly buttery and sweet, the way a buttercream should be. One of the problems I’ve often had with American buttercream recipes is that they are often far too sweet. The sugar ends up overwhelming everything else and then you’re just eating powdered sugar that’s being held together by butter. This was not that. It melted in your mouth but slowly sat on your tongue for a little bit so that you could really feel its density and depth of flavor. It melted on your tongue the way butter should.

Freeze Test:
I didn’t freeze any of this buttercream, though I must imagine it’s possible to do, because I’ve frozen American buttercream frostings before reasonably successfully. One note I will make: for the layers of buttercream in between the cakes, I used frosting I had made the night before. I re-beat the frosting before using it again. Texture-wise, it was just a little bit less malleable than the freshly made frosting. Color-wise, it was a bit more yellow than the freshly made frosting. For the outside of the cake, I made fresh frosting which was light, malleable and perfectly white. I would recommend using freshly made frosting for the majority of the decorating, and if you are trying to save time, I would use pre-made frosting only for the crumb coat (if you’re doing one) and between the layers.

Decoration Test: A
I’m really quite pleased with how the decoration of this cake turned out. I spent a lot of time with the cake scraper, working the edges of the cake until they were completely smooth. I’ve been trying to master the completely smooth cake edge technique for a while, and this is the first time I think I’ve really gotten it! What’s more, I was really pleased that an American buttercream of all things with its dense and thick texture was malleable enough to be smoothed completely against my delicious, perfect cake.

I wanted to keep things simple, since my main focus was the smoothness of the cake edges and the updated cake recipe itself. Earlier that day, Ben and I went to a brand new coffee shop and French bakery in Philadelphia called J’aime. While we were there, we actually met the owner and head chef at J’aime, Bastien. He was absolutely delightful and even talked to me about the wedding cake recipes I’ve been testing. The cafe itself reminded Ben and I of one of our favorite little French bakery and cafe’s in Washington DC, where we met. At J’aime, they sell their homemade little “meringue chips” which are basically just bite size French meringue cookies that are perfectly chewy and then melt in your mouth before you know it. We bought a small bag of their multicolored and multi-flavored meringue chips and threw a few on the sides of the cake to make it beautiful, lively and a little dainty. 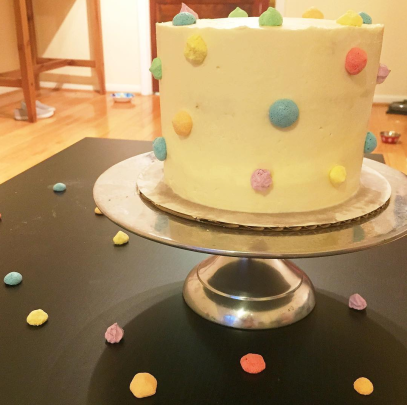 Batch Test: A
This buttercream was actually really easy to make. The recipe was so well standardized and easy to follow. 3 cups of sugar. 3 tablespoons of vanilla. 3 sticks of butter (plus 2 tablespoons oops!). 3 tbsp of milk. So easy to follow and remember. I actually had to make two batches to frost the cake, but like I said, it was such an easy to remember and straightforward recipe, it was a snap to make a second batch!

Overall Score: A
I think I may have found a winner! The icing was an A and the overall cake with the icing was also an A. I knew a few weeks ago when I first made this cake that I wanted to love it so badly because it was just shy of perfect. For my taste and for Ben’s, this cake has met basically everything we’ve hoped. I think in the end, I”ll want to do a two or three tiered wedding cake and I would love to explore having different flavors for each of the tiers (saw that one on the Great British Bakeoff in case anyone recognizes this move), but I can confidently say this will definitely be in the running. The frosting recipe will be a staple and I will absolutely be pairing it with future cakes because it is such a winner.

4 thoughts on “My Favorite Cake I’ve Made So Far! With American Buttercream Frosting” 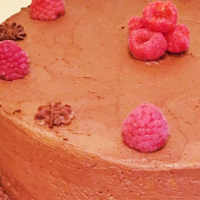 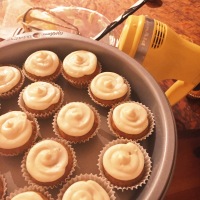 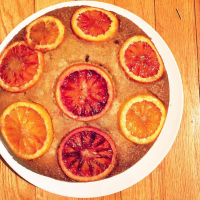 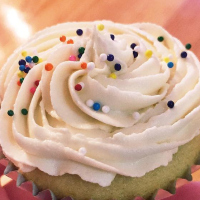 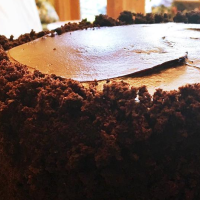